St. Germain taught that man has in him infinite possibilities and that from the practical point of view, he must strive unceasingly to free himself from matter in order to enter into communication with the world of higher intelligences.

"The orbit (magic circle) which thou seest on the preceding page will serve thee as a model to make others which shall be nine cubits in diameter. Thou shalt use these to perform marvels, a privilidge which thy predecessors Beros and Sanchoniaton did not have. I give thee at the same time the intelligence of the characters in which is written my revelation so that thou mayest make use of them for three purposes: to find things lost in the seas since the upsetting of the globe (the Deluge); to discover mines of diamonds, gold and silver in the heart of the earth; to preserve the health and prolong the life to a century or over with the freshness of fifty years and the strength of that age."

In Jungian metaphor sunken treasure and buried diamonds or precious stones of the wise are submerged in our psyches, waiting to be drawn up to consciousness. Retrieval of these lost or hidden treasures means tapping the wisdom of the collective unconscious and its primordial images.

Water is transformative, the agent of metamorphosis linked to the alchemical operation of Solutio. The Earth is linked to the operation of Coagulatio. Therefore, we are reminded of the alchemical maxim "Solve et Coagula", the union of opposites. It is the formula for giving birth to a new life form, half organic and half spiritual. Only that which has first been separated can be properly rejoined.

Solutio, dissolving a solid into a liquid form, is a prerequisite for magical rebirth, a source of regeneration. In solutio, you reunite the powers of Above and Below, integrating spiritual powers for direction. It is continual meditation on the contents arising spontaneously from the depths of your psyche, then grounding them in day-to-day experience. This operation heals the split between the physical and spiritual. Only the best qualities of the ego survive solutio. The Self, the Stone becomes the new center of personality.

Miners dug into the earth to extract its minerals. But theirs was a sacred task, for metals are born in the womb of Earth. Miner, smelter and smith alike were engaged in the common task of assisting nature to come to fruition.

"VITRIOL" is a prescription to visit the interior of the earth and find the Philosopher's Stone by rectification. It suggest we mine our own depths. This grounding is also a move into manifestation based in spiritual depth. Paradoxically, Vitriol was the most important liquid in alchemy. All other reactions are contained or take place in it.

St. Germain's text suggests we go mining diamonds, gold and silver. The diamond is a symbol of the perfected Self, the higher Self. It is equivalent to the sacred geometry contained in the Diamond Body -- the Merkabah of the Kabbalists. The Rosicrucian motto V.I.T.R.I.O.L. (Visita Interiorem Terrae Rectificandoque / Invenies Occultum Lapidem) is a code that urges us to "Visit the interior of the earth and… you will find the secret stone."

The precious metals, gold and silver represent the alchemical opposites of Sun and Moon, respectively -- archetypal male and female energy. The yang and yin of alchemy. In alchemical terms Sol/Gold stands for Light, Fire, Red, Sulpher, the Red Lion and The King. Luna/Silver is dark, left, water, white, mercury, The Queen and the White Eagle. Luna is the Lesser Work of Alchemy, Sol is the Greater Work. The philosophical Gold, like the Lapis or Stone is a symbol of the goal of alchemical transmutation from mundane Lead.

Thus, we have the injunction to perform the rite when sun, earth and moon are in conjunction, when Sun and Moon are one...or "married" in alchemical terms. It could indicate an eclipse of the Sun or the Moon which occur during such alignment.

St. Germain claimed to possess the secret of eternal youth, one of the two traditional goals of alchemy. He never seemed to age. For an entire century he maintained the physical appearance of a man between forty and fifty years old. He could do just about anything. Baron de Gleichen tells in Sourvenirs de Charles Hemri, baron de Gleichen (1868), that according to his acquaintances, St. Germain had the appearance of a man of fifty years old.

The alchemists wrote using symbols, the universal language. Great truths are often taught using symbolism, parables or metaphor, which can be interpreted on many different levels.

All of the outer procedures have an inner correspondent, so they describe inner experiences as well as those in the chemical laboratory. This is the Hermetic Law: "As above; so below. As without; so within." The first goal is to find the Philosopher's Stone or the Elixir of Life, the Key to Immortality. Then, the Stone is applied to the lead, or man himself, to change it into gold, or the immortal self.

The method is the harmonizing of duality. Alchemy is not a religious, metaphysical, nor ethical pursuit. It looks on the play of the powers of the Soul from a purely cosmological point of view, treating the soul as a ‘substance' to be purified, dissolved and crystallized anew.

St. Germain: "The Man Who Never Dies" The Hungarian magus, St. Germain was among the most famous Adepts of Europe. The Comte de St. Germain, “der Wundermann,” is a legendary figure. Little historical fact is known of this Hungarian Adept, a genius or charlatan, depending on your point of view.

The Rosicrucians claim he was Sir Francis Bacon in a previous, or perhaps even extended life. New Agers count him among the Ascended Masters. He is strongly linked with the Freemasons, Rosicrucians and Knights Templar. He could allegedly astral travel or bilocate and produced an elixir of youth.

The self-styled Count has shadowy origins and his birth and death dates are unknown, as is his true identity. He was thought to be the love child of the widow of Charles II of Spain, or a Sephardic Jew from Portugal, although Theosophists glorify him as the son of Francis Rakoczi II, the prince of Transylvania.


The Count was an international spy, ringleader of secret societies, enlightened visionary and proponent of U.S. freedom, urging on the Founding Fathers, including Washington and Franklin, in their faltering moments. He worked behind the scenes for a United States of Europe. He carried much of Bacon's agenda and political philosophy forward in a rapidly changing world, ratifying the magical current of Roger Bacon, John Dee, Sir Francis Bacon, and himself. 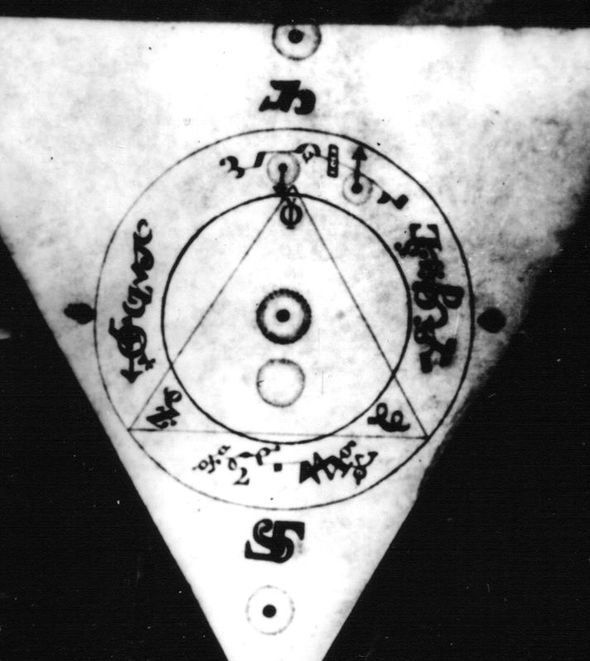 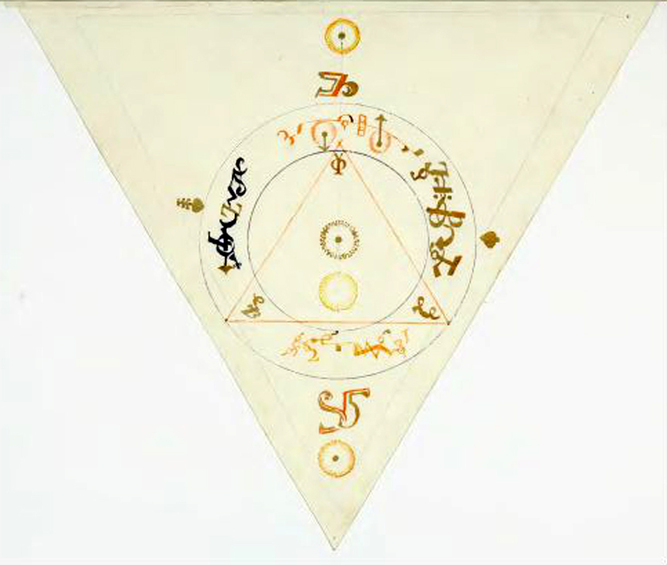 Circumpunct
"The orbit (magic circle) which thou seest on the preceding page will serve thee as a model to make others which shall be nine cubits in diameter. Thou shalt use these to perform marvels, a priviledge which thy predecessors Beros and Sanchoniaton did not have. I give thee at the same time the intelligence of the characters in which is written my revelation so that thou mayest make use of them for three purposes: to find things lost in the seas since the upsetting of the globe (the Deluge); to discover mines of diamonds, gold and silver in the heart of the earth; to preserve the health and prolong the life to a century or over with the freshness of fifty years and the strength of that age."

The core of the figure is the Solar Cross, encoding the Precession Great Cycle...a time of maximal magical leverage for rituals of solar/galactic alignment. The 2 crosses align in 2012. The head is Kether, the solar heart Tiphareth. This is reiterated by the Sagittarian arrow of Art path pointing to the Zero Point of galactic alignment which occurs at the ecliptic with Sag pointing its position. Naturally, much more could be said energetic Light Body.

"In the idiom of symbology, there was one symbol that reigned supreme above all others. The oldest and most universal, this symbol fused all the ancient traditions in a single solitary image that represented the illumination of the Egyptian sun god, the triumph of alchemical gold, the wisdom of the Philosopher's Stone, the purity of the Rosicrucian Rose, the moment of Creation, the All, the dominance of the astrological sun, and even the omniscient all-seeing eye that hovered atop the unfinished pyramid. The circumpunct. The symbol of the Source. The origin of all things."

It is true that the circumpunct symbol has been around for millennia, albeit more often known as "the circle with the dot in the middle". It is commonly used as a solar symbol and reputable sources date this to ancient Egypt, where the symbol has its origins in Ra (or Re), god of the midday sun. In fact, the circle with a midpoint, plus a vertical line is the hieroglyph meaning "sun".

So how did an Egyptian symbol rise to shine again as a token of the ancient mysteries among 21st-century Freemasons in Brown's novel? Langdon's exposition is as follows: "The pyramid builders of Egypt are the forerunners of the modern stonemasons, and the pyramid, along with Egyptian themes, is very common in Masonic symbolism." Very neat. Well done, Brown.

This simple symbol has many meanings, often spiritual. The Stanford Solar Center says the circle with a point is the common astrological and now astronomical symbol for the Sun, as well as the ancient alchemical symbol for gold, the perfect metal. This is because the sphere is a perfect shape, representing wholeness, oneness, unity and spirituality.

In her book Life Symbols as Related to Sex Symbolism, Elizabeth E. Goldsmith writes that the dot within the circle dates to ancient times and may have typified the seed within the egg. "This is the 'Orphic egg', a symbol of the universe whose yolk in the middle of a liquid surrounded an encompassing vault, represented the globe of the sun floating in ether and surrounded by the vault of heaven," she writes. How apt then that Ra – worshipped as the great father who created gods and men – should be represented by this symbol.

In Hinduism the midpoint in the circle is called a "bindu" – meaning point or dot – and it's said to signify the spark of male life, the point at which creation begins within the cosmic womb and one becomes many. According to the book Yantra: The Tantric Symbol Of Cosmic Unitythe bindu is the "the sacred symbol of the cosmos in its unmanifested state".

Representing eternal life, one of the most famous and commonly used Egyptian symbols is the ankh, a cross shaped symbol with a loop at the top – one of its other names is crux ansata, Latin for ‘cross with a handle’. It is also known as the 'key of life' or the 'key of the Nile'. The ankh features in hieroglyphic text and iconographic art all over ancient Egypt with the gods often carrying it by its loop, or bearing one in each hand, arms crossed over their chest. Many Egyptians carried an ankh as an amulet.

Its origins are much debated; Alan Gardiner, who has written extensively on hieroglyphs, suggested it came from the part of a sandal strap called ‘nkh’, but it’s not sure if this name was applied retrospectively because of the similarity in shape. Others have put forward ideas relating to male and female reproductive parts, while some think it represents the sun on the horizon, with the path of the sun before it.

A similar symbol, but with the top loop shaded in has been found in Peru. Used by the Mochica culture circa seventh century AD, the discovery of this symbol is one of the many reasons which have led scholars to believe there was more contact between Mediterranean and pre-Columbian cultures than previously thought.